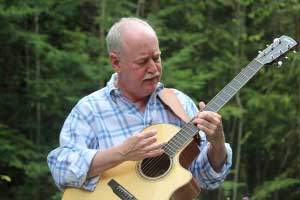 Neil Tatar is an experienced composer, guitarist and pianist. A playful and expressive musician, he has a unique sound that is contemporary in style, primarily rooted in blues, rhythm and blues, light jazz, and World music. Driven by his love of music and passion for helping others, Neil has been a performer, a teacher, and a composer for more than 35 years.

In recent years, Neil has been focused on writing his own compositions, which have received international airplay and recognition. Some of these compositions were recorded for his first album, Where Did the Time Go, a collaboration with Grammy® Award-winning cellist David Darling. The album received stellar reviews and reached the #1 ranking worldwide on the ZMR Top 100 Global Radio Airplay chart in 2015; the album was also selected as a finalist for Best Contemporary Instrumental Album of 2015. His second release, Learning To Fly, was recorded at Imaginary Road Studios under the guidance of legendary producer and guitarist Will Ackerman (Founder of Windham Hill Records). This album highlights Neil’s ability to communicate directly to the listener through his music, working closely with world-class producers, sound engineers, and session players. The album landed on the Grammy ballot for Best New Age album of 2015, reached a #1 ranking on the ZMR Top 100 Radio Airplay chart, and was selected as a finalist for Best Contemporary Instrumental Album of 2015. In May of 2016, Neil was honored by Zone Music Reporter as Best New Artist of 2015, an award presented by broadcasters, reviewers and radio programmers worldwide. Currently, Neil is excited to introduce his third album, titled After The Rain, working again with Imaginary Road Studios.

Neil has been helping others discover and develop their musicality since he was an undergraduate at Boston University in the 1970s. He offered guitar lessons to students in the greater Boston area and also focused on developing his own skills as a performing artist. To this day, when Neil isn’t recording music, he focuses his creative energy on leading improvisational workshops for a variety of groups, including adult mental health programs, camps for children with serious illnesses, assorted college groups, and regional arts councils. His workshops echo the energy he brings from continued inspiration and training. As a facilitator, he creates a safe and supportive environment for participants. He welcomes the musically inexperienced as well as the seasoned professional.

True to his devotion to improvisation, Neil’s workshops are playful, always exploring and revealing new skills and inspirations in participants, who have reported expanding their musical repertoire or happily becoming reacquainted with their musical selves. A musician through and through, Neil is regularly humming a tune, drumming, playing funky guitar, composing on the piano or pulling something musical from his laptop.